The female orgasm is a lot more complicated than the male orgasm. Many women will admit that they rarely have an orgasm during intercourse, and there are more women that will keep it to themselves. With a little bit of knowledge and even some practice, you will be able to bring a woman to the critical point that signals 90-seconds to female orgasm.

Unlike men that reach a point-of-no-return where an orgasm is inevitable, females don’t have the same reaction and can lose their impending orgasm very easily. When the right attention is paid to a woman, in the right spots, at the right time, and in the right place, a female orgasm will happen. There is a point during lovemaking that sex therapist, Ian Kerner calls the “90-Second Window”. This window is where a woman can attain or lose her ability to orgasm in the next minute or so.

Most women will agree that the best position for them to achieve an orgasm is to be on top, also known as the female-superior position. This position is favored by many women because it provides persistent stimulation to the clitoris. Foreplay is also a very important ingredient in the female orgasm. Men should think of this as the first half of the adventure. Just like that song by John Mayer, your girl’s body is a wonderland so go ahead and explore it. Another option is oral sex. With the focus on her, and all that direct clitoral stimulation, it is no wonder that a lot of women only orgasm during oral sex.

After a significant amount of foreplay, it’s time for the man to watch for the signs of the 90-second window to female orgasm. The visible sign that lets you know that a woman is aroused is the muscle tension that builds through her body. This tension can especially be seen in the pelvic area, as well as in her feet and hands. Because many women need to have non-distracted focus and even a mental state that will withdraw inwards, many women do not moan or shout out in pleasure. As the 90-second window gets closer, her body will grow tenser. Don’t be afraid to ask her if she is getting close. During this 90-second window, it is best for the man to keep doing exactly what he is doing. He shouldn’t change the speed or the amount of thrusting, but should instead provide stable resistance against her body movements. Let her do the moving against your solid stance until she orgasms.

For more information on Female Orgasms and to watch a live demonstration of how to stimulate the G Spot  check out OrgasmArts.com 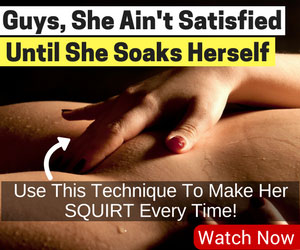